The Anatomy of the Larynx

Understanding how your voice is produced and the muscles that are involved may help in your knowledge of what is happening when you speak. Let’s start with the anatomy. The larynx, or voice box, resides between the base of the tongue and the top of the trachea, the passageway to the lungs. The larynx consists of several basic anatomic parts: cartilaginous skeleton, intrinsic muscles, extrinsic muscles, nerves, and a mucosal lining.

Intrinsic Muscles of the Voice

Each of the laryngeal muscles plays a critical role in production of voice. Below is an overview of what the muscle does.

The larynx contains two vocal cords. Each cord consists of a thyroarytenoid muscle (TA), which is sometimes called the vocalis muscle, wrapped inside a thin layer of mucosa. Because the mucosa and muscle tissue are folded together to create a cord, they are often referred to as the vocal folds, though these two terms are used interchangeably. The right and left vocal folds come together to look like a “V” when viewed from above, and attach to the arytenoid cartilage in the laryngeal skeleton.

The TA muscles do not work in isolation to move the vocal folds. Several other intrinsic muscles work together to change the position, tension, and pressure of the folds. Improper functioning of any of these muscles results in decreased vocal quality.

The posterior cricoarytenoid muscles (PCA) open, or abduct, the vocal folds. Because they separate the folds, they are critical for producing what are called “voiceless” sounds that do not require the vocal cords to vibrate. Examples of voiceless sounds include the “f” and the “s” sounds.

The lateral cricoarytenoid muscle (LCA), like the PCA, also runs from the arytenoid to the cricoid cartilage. Where as the PCA opens the vocal folds, the LCA helps to close, or adduct, them. A good way to keep this straight is to remember that the PCA oPens and the LCA cLoses.

Working in close conjunction with the LCA, the interarytenoid muscle (IA) brings together and stabilizes the arytenoids. When air passes through the closed vocal cords, they vibrate and produce “voiced” sounds, which are all the sounds that have a “buzz” to them, such as the vowels in “pit” or “cat.”

While the LCA and IA are responsible for changing the width of the opening through which the air passes, the cricothyroid muscle (CT), which runs from the cricoid cartilage to the thyroid cartilage, helps to change the tension and pressure of the TA. This is important because it alters the pitch of the voice.

How Speech is Produced

With knowledge of what each laryngeal muscle does and which nerve controls it, understanding how speech is produced becomes easier. The vocal folds do not produce sound by vibrating like guitar strings. Instead, small jets of air pass through the vocal folds, creating pressure changes within the vocal tract and producing sound.

The process starts when the lungs and diaphragm push air through the larynx. As the air presses on the resting vocal cords, it parts them. The cords separate in a wave-like fashion, starting from the bottom and moving towards the top. As soon as the pressure passes by a part of the vocal cord, the subsequent reduction in pressure causes that part of the cord to return to the closed position. The closure of the vocal folds cuts off the air column and releases another pulse of air.

To visualize what happens to the wave as air passes, imagine a person trying to push through a crowd watching a parade. As the person pushes through each row, the crowd separates only long enough to allow the person to move forward. As soon as the person moves to the next row, the line closes again. The same thing happens with the air passing through the vocal fold. The rapid pulses of air created by the quickly repeating vibratory waves produce the voiced sounds.

As the air pulses and vibrations continue their voyage up the throat and out the mouth, they pass through the throat, nose, tongue, and lips. Changing the shape, size, position, and tension in any of these components of the vocal tract modifies the sound and turns it into speech. 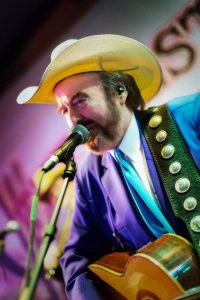 For the late country singer Johnny Bush, spasmodic dysphonia put his career on hold for many years. It wasn’t until his doctor, Blake Simpson, MD, took a different approach to treatment that he found his voice again. He started to inject the extrinsic muscles, which include the strap muscle, with botulinum toxin. Johnny was able to perform again and singing the hit song he wrote, “Whiskey River”.  Johnny also helped to raise awareness as a member of the Honorary Board of Directors.

HOW THE VOICE WORKS

The vocal cords are also known as vocal folds, and the terms are used interchangeably. They are folds of tissue in the throat that are key in creating sounds though vocalization. The size of the vocal folds affect the pitch of the voice. The vocal folds are controlled via the recurrent laryngeal branch of the vagus nerve and open when breathing and vibrate for speech and singing. 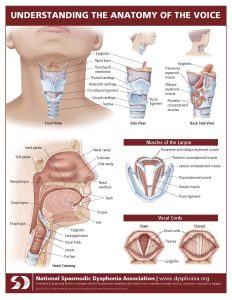