SLAD-R: A surgical option for treatment of spasmodic dysphonia

The Selective Laryngeal Adductor Denervation-Reinnervation (SLAD-R) was pioneered by Dr. Gerald Berke at UCLA that focuses on the treatment of the tiny nerve branches that go to the individual muscles involved in AdSD.

The overall procedure is accomplished through an incision in the neck, which creates a small window into the laryngeal cartilage to expose the underlying nerves and muscles. An operating microscope is often used to aid in identification and suturing of the tiny nerve branches.

Next, the surgeon connects an unaffected nerve to the cut stumps of the nerves treated in denervation. This process, known as “reinnervation,” prevents the weakened muscles from atrophy and also blocks the denervated nerve branch from reconnecting and the spasms from returning. Great care is taken to preserve the back part of the cartilage that protects the nerve branches to the breathing muscles. The overall procedure takes three to four hours to complete and is performed under general anesthesia.

A hospital stay of one to three days is usually required. Some people have initial difficulty swallowing because doctors are borrowing from the swallow nerve, so swallowing is temporarily impacted, however, the reflex usually recovers within the first day.

You may find that you will no longer be able to yell or project your voice. In addition, the nerve that controls pitch is often affected and that can making singing challenging.

• Return of spasms (10-20% of time)
• Morphing into other dystonia can occur, but it is rare
• Permanent breathiness if too much muscle is cut
• Swallowing difficulty (has not been a permanent problem)

• Classic Adductor SD (not mixed, not Abductor)
• No tremor (tremor is not taken away in surgery)
• Good response to botulinum neurotoxin injection which can confirm diagnosis AdSD )
• Able to cope with the post-surgical breathy period
• Must have good expectations

• Has a vocal tremor
• Want a guarantee of success
• Want to be able to sing
• Need to project their voice
• Has muscle tension dysphonia with poor response to voice therapy. Bad habits will continue to exist after surgery and need to be eliminated before surgery therefore a voice therapist might be needed before surgery.

Over the last 24 years, the results of SLAD-R operation have been quite favorable, with more than 80 percent of patients happy that they had the operation. People report a very breathy voice for about two to four months after the operation, with their voices then getting progressively stronger over a year of healing. Many people report a permanent stable resolution of their voice breaks. Although largely successful, a handful of people have reported poor voice outcomes with permanent alteration of their voices. Very few s have had recurrence of symptoms and returned to botulinum neurotoxin treatment. 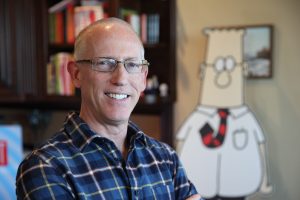 “Dilbert” creator Scott Adams chose to have SLAD-R surgery. He made a strong recovery from the procedure and recently, he was asked to record the audio narrative for his new book but he wasn’t sure that his voice quality was up to par. He was anxious about it, but agreed to read aloud for 4 hours per day for 4 days. “When the audio director said it was a wrap, I didn’t expect the emotional impact it would have on me”. The end result is a 9-hour audio file.