In rare occurrences, individuals have reported difficulty breathing. While this is not a voice disorder, breathing difficulty has been reported in those with SD. Dystonias like laryngeal dystonia or a diaphragmatic dystonia can include breathing issues. That’s why this topic is included under voice disorders.

Respiratory difficulties are sometimes reported by patients with other forms of dystonia, Diaphragmatic dystonia is the involuntary, sustained, or sudden contraction of the diaphragm manifested as prolonged spasms. There has been very little published literature on disorders involving respiratory dystonia and resulting breathing problems.

Individuals afflicted with respiratory dystonia may have difficulty inhaling air through a glottis closed by adductory spasms, or may be able to inhale without difficulty but then to find it hard to breathe out, essentially becoming the victim of involuntary breath-holding.

In some cases, botulinum toxin has been found to alleviate a laryngeal based respiratory dystonia. A largngologist or ENT are the best specialists to see if you suspect a laryngeal-based breathing issue.

If a person has another dystonia and develops a breathing issue, it is important to see a neurologist who specializes in movement disorders. 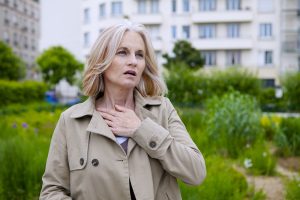 Having trouble breathing isn’t usually associated with a vocal disorder, but for people with respiratory dystonia,  life can be very challenging.  Seeking out the help of a neurologist that specializes in movement disorders is important for someone with a dystonia impacting breathing.