Muscle tension dysphonia (MTD) is a condition of extra vocal work and strain. Most of the time, it is due to extra effort that one puts into voice to try to work around another vocal problem. More rarely, it can occur all by itself.  It involves putting extra effort into a vocal task that perhaps is not necessary or required to make sound. This can actually lead to worsening of voice and other throat symptoms in and of itself.

Muscle Tension Dysphonia is considered a functional condition rather than a neurological one. It occurs when the speaker exerts too much pressure or effort on the laryngeal muscles causing the voice to sound tight or strained. This tension prevents the voice from working efficiently. It is sometimes referred to as a “hyperfunctional” voice.

There are two types of MTD:

MTD is most prevalent among people in the 40- to 50-year-old age group and especially women.

MTD can have a wide variety of symptoms. Individuals may have a rough, hoarse, gravelly, raspy, weak, breathy, airy like a whisper, strained, pressed, squeezed, tight or tense voice. A person with MTD may complain of a tired voice or experience pain when speaking.

The condition is hard to diagnose and is often misdiagnosed. It frequently mimics other illnesses like SD and there is no definitive test for the condition. An appropriate diagnosis requires a thorough examination by an experienced voice specialist.

When physicians are assessing a patient’s voice to make the diagnosis between MTD or SD, they use phonetic loading, which involves phrases that have a certain sound that bring out the characteristic features of SD.

Sometimes people will present with a very tight, strained, strangled quality to their voice that is fairly consistent, known as chronic constriction, where the person’s voice is continually strained and the physician has a hard time sorting out if it is solely MTD or SD with MTD. Sometimes it can be very hard to sort out the two just by listening or by voice therapy techniques, so the physician can use botulinum toxin as a trial. By weakening the muscles, the physician can examine the results and determine the diagnosis.

There is no known scientific cause for MTD. However, experts believe that it may be caused by the body’s voice production system reacting to irritants. Common irritants include upper respiratory infection, second-hand smoke, laryngopharyngeal reflux (LPR), significant vocal demands, or even stressful life events. It is thought that a person attempts to compensate for the vocal changes, using excessive muscle tension or recruiting the use of muscles not ordinarily active.

MTD is primarily treated with voice therapy, which acts as physical therapy for the voice. Speech-Language Pathologists have a variety of techniques to improve the extra work that the person adds on while using their voice. Speech-Language Pathologists are necessary for this therapy. Voice therapy is not something that can be done from a printed instruction sheet because improving vocal efficiency is not obvious. When speaking, the complex movements that are happening really aren’t intuitive to modify without the help of a speech pathologist. For example, if a person were simply told to stop squeezing their vocal cords so hard when speaking, this task would be difficult to wrap one’s head around.

It is important to note, however, that the extra muscle tension dysphonia that commonly occurs on top of the abnormal movements of SD can be improved with voice therapy after botulinum toxin injection.

Spasmodic dysphonia (SD) is a neurologic condition of vocal cord movement control in the brain, which leads to involuntary spasms of the vocal cords either together or apart during voicing. Something is happening in the movement control centers of the brain pertaining to vocal control that account for the vocal breaks of SD.

Not surprisingly, many people with SD may also have elements of muscle tension dysphonia on top of their SD symptoms. This is due to extra vocal work that is required to try to make stable voice in a setting where vocal cord movements are happening involuntarily from the SD.

Let’s use an analogy to make this a bit more clear:

For example, if you have an elbow injury with a painful and stiff joint, you likely will recruit extra muscles around that joint to try to protect, splint, and control the movement of the injured joint. This can lead to a variety of additional symptoms beyond the joint injury. It can lead to muscle fatigue around the arm and pain outside the joint. It can actually reduce movements in this joint.

Because of this, it is common to add extra muscular effort and push when speaking to attempt to generate more stable sound around the vocal cord spasms. This extra effort and push may sometimes be counterproductive and cause additional voice and throat symptoms. When this happens, muscle tension dysphonia is occurring in addition to spasmodic dysphonia.

It is difficult for doctors to determine the difference between muscle tension dysphonia and spasmodic dysphonia because physicians can not see the muscle movements happening in SD. When we look at the vocal cords while the person is speaking, we can’t really see these vocal cord spasms that happen. Therefore, because physicians do not have a precise diagnostic tool for SD or MTD, they rely largely on their ears.

There are some unique features about SD and MTD that can help sort out the difference between the two. People with SD would typically report that laughing, crying, or whispering is completely or nearly normal. Overall, with laughing and crying tasks, the way a person makes them happen is through different motor systems in the brain. That system is not involved in SD, so these sounds come out quite smoothly. People with SD report that when they laugh or cry, their voice is completely normal. Or, if they are frightened or in an emergency situation, it’s a big emotional task, and the voice will come out more clearly. High pitch sounds often come out clearly as well in SD. With a person that has pure MTD, this does not occur. When the person is whispering, crying, or laughing, the voice continues to remain tight. 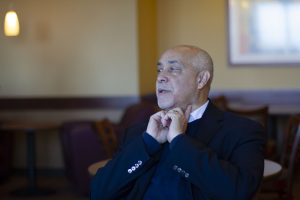 Victor lives with both spasmodic dysphonia and muscle tension dysphonia.  He is an amazing advocate, teaching future SLPs about the impact of MTD and SD so that they can help others with these conditions. 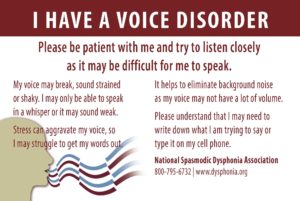