The research related to the cause is ongoing, however, evidence suggests the basal ganglia in the brain, which is involved in planning, patterning and initiating muscle movement, is impacted in people with SD. Patients who have SD were found to have an increase in D1 receptors in the right putamen and caudate nucleus of the brain. This receptor functions to produce the message to the ganglia pathways that control movement, basically telling it to go. Researchers also found that there is a corresponding under production in D2 receptors which is designed to counteract or balance the D1 receptor messages. This function to basically regulate the movement, don’t move so fast, or stop. There are all kinds of receptors and pathways in the brain, but this overproduction of D1 and underproduction of D2 receptors is localized to the portion of the brain that controls movement specifically for the larynx.

What makes finding the cause even more difficult is that the spasms do not occur in all types of speech. Two studies conducted in 1968 by Aronson, et. al., and one conducted by Ludlow and Connor in 1987, have shown that the symptoms of SD improve or disappear during laughing, crying, yelling, throat clearing, coughing, whispering, and humming.

Generally, SD does not affect the emotional aspects of speech. SD is task-specific and tends to affect only normal conversational speech. Researchers consistently have identified abnormalities in brainstem reflexes and other aspects of disordered neurological function in people with spasmodic dysphonia.

Genetic factors may also put some people at greater risk of developing spasmodic dysphonia, particularly those who have family members with any form of dystonia.

While some evidence may suggest that symptom onset follows an illness such as viral infection, head trauma, bronchitis, surgery, or a stressful event, it has not been scientifically proven and the medical community has not reached agreement on whether illness or stress plays any part in the onset of SD. Regardless of the cause, it is important to get a correct diagnosis so that you can consider the available treatment options. 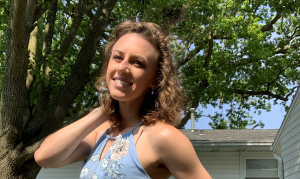 It was the Summer of 2012, and her mom had just been diagnosed with breast cancer.  Caitlin lived over two hours away from her family, so along with feeling depressed, stressed out, isolated, and angry, she also felt hopeless for her mom.  She started to experience a squeaky voice, then it became difficult to just get a few words out.  “It was like one day I had a voice and the next day I didn’t”