Navigating the types of spasmodic dysphonia

Spasmodic dysphonia can also be combined with other disorders, making it more difficult to diagnose and treat.

Adductor SD, the most common form, and affects approximately 80–90% of people with SD. In this type, spasms, usually in the thyroarytenoid muscle (TA), force the vocal folds together in adduction, or closing. AdSD can also affect the lateral cricoarytenoid muscle (LCA) or interarytenoid (IA). When looking at the larynx, an adductor SD case would show vocal folds that stay closed longer or close with more force. These spasms occur particularly on “voiced” speech sounds.

Examples of “voiced” sounds that cause problems for those with adductor SD include the vowel sounds in the words “eat,” “back,” “in,” “I,” “olives,” or “nest.” If the voice cuts out, or breaks when the voiced sound is at the beginning of the word, as in “eels,” the speaker often strains over the spasm to get the word started. If the troubling vowel occurs in the middle of the word, the voice often breaks the word in two. For example, the word “lawn” would come out as “la—awn.”

People with AdSD will have difficulty with sentences that contain voiced sounds such as these:

When the voiced vowel is at the end of the word, such as “pleasingly,” the word terminates earlier than it should, causing the speaker to sound as if he or she is swallowing words. A person with AdSD usually has no effort or disruption with the non-voiced vowels and unvoiced consonants. However, since most words and sentences contain voiced sounds, an adductor voice can be very hard to understand as the spasms continuously interrupt the flow of speech.

In very severe cases, the person with AdSD may need to use extreme effort to produce any voice at all. People with AdSD often describe the sensation of having to struggle to speak.

AbSD, a less common form, occurs in approximately 10–20 percent of cases and results from spasms when the posterior cricoarytenoid muscles (PCA) abducts, or opens, the vocal folds. In AbSD, the spasms in the abductor muscles cause the vocal folds to remain open for a longer duration than should normally occur on these sound combinations. This results in the voice taking longer to complete the voiceless sounds, which makes the speaker sound “breathy.” AbSD causes problems with the production of “voiceless” speech sounds, which normally sound “airy” or “breathy” when produced. Examples of “voiceless” speech sounds are:

For example, a person with AbSD might produce the word “he” as “h……….he.” The symptoms of AbSD can occur on any voiceless sound at the beginning, middle, or end of the word.

People with AbSD will find these sentences with voiceless sounds more challenging:

The symptoms in AbSD can range from mild to severe. Significant overall breathiness or a whispered voice quality may occur in people with a very severe form of the disorder where breaks occur on every voiceless consonant. Because people with AbSD expend too much air as they produce sound, they often describe themselves as feeling winded or out-of-breath during speaking.

Spasmodic dysphonia in combination with other disorders

While most people with spasmodic dysphonia fall into the category of AdSD or AbSD, researchers have identified several subtypes.

• A person may have a mixed form with symptoms of both AdSD and AbSD.

• Some people with SD also have a tremor in their voice. Typically, a tremor affects muscle groups outside of the larynx and can cause the voice to sound “shaky” or “quivery.”

• SD may also be accompanied by or misdiagnosed as muscle tension dysphonia (MTD), which is sometimes also referred to as a “hyperfunctional” voice. Although the MTD voice sounds tight or strained and sometimes similar to AdSD, MTD is considered a functional condition rather than a neurological one. The person has trained their voice to behave a certain way to, usually to compensate for another disorder. 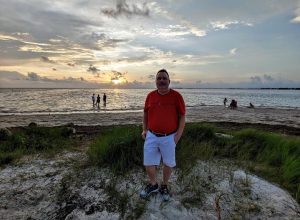 Ron was diagnosed with abductor spasmodic dysphonia.  More recently, his doctors are considering changing his diagnosis because his symptoms are tricky.  Ron is a support group leader in Florida and continues to help others cope with SD.