Vocal Cord Paralysis (VCP) is impaired movement of the vocal cords caused by an injury to the vagus or recurrent laryngeal nerves that are critical to normal speech production.

There are generally two types of VCP:

• The onset of breathy voice is related to a recent viral illness. Once the viral illness is improved, the voice and swallow dysfunction does not improve. This then prompts the patient to seek healthcare.

• Patients who undergo cranial, head and neck, thyroid, thoracic, cardiac and esophageal surgery, the nerve to the larynx is at risk because of the proximity of the nerve near where the surgeon is working.

• Anyone who has undergone radiation therapy, intervention by angiography, or neurotoxic drug administration.

• Some patients, especially elderly patients, with risk factors for cancer of the lungs, esophagus, thorax, or thyroid are at risk for developing vocal cord paralysis.

• Vocal cord paralysis may be the initial presenting sign and symptom in patients that are eventually identified to have a growth or tumor along the course of the vagus nerve.

If you have been diagnosed with vocal cord paralysis, it is important that a search for a cause is made. The first fork in the diagnosis is whether the immobility of the vocal cords is a result of a neurological dysfunction or due to a mechanical issue along the nerve. Once this distinction is made, the appropriate testing for the underlying cause can begin and optimal treatment can be established. The main categories for causes of vocal cord paralysis or vocal fold paresis are Idiopathic, Iatrogenic, tumor or neoplastic, or due to disease process.

• Idiopathic refers to the presence of a virus that caused inflammation of the nerve. Many viral infections have been associated with vocal fold paresis. These include herpes simplex virus, cytomegalovirus, coxsackie virus, and simple upper respiratory infections. Bacterial infections including Lyme disease and syphilis have also been reported to cause vocal fold paralysis and paresis.

• Latrogenic refers to symptoms brought on unintentionally by something that a doctor does. Causes may be due to surgery of the skull base, carotid artery, neck, thyroid, esophagus, or thorax. Anything that results in manipulation of the nerve can cause injury to the long vagus nerve that arises from the skull base, goes into the chest and then comes back into the larynx. Some of the common surgical related traumas include: thyroidectomy, spine surgery, skull base surgery, thoracic surgery for aneurysm repair, and carotid endarterectomy.

• Occasionally, nerve injury may be due to disease that affects the laryngeal nerve. These are diseases that can cause either one or multiple nerves to the larynx to become affected, resulting in nerve dysfunction.

The diagnosis of vocal cord paralysis, paresis, or vocal fold motion impairment is usually made in the otolaryngologist office. The diagnosis is made after a thorough history and physical examination.

Diagnosis of vocal fold immobility—When there is no movement of the vocal fold. This is called vocal cord paralysis.

Determining whether the nerve is permanently or temporarily injured is determined by more in-depth electrodiagnostic testing is required.

— Videostroboscopy and Voice assessment by a speech language pathologist may be used.
— Stroboscopy allows for more detailed view of the vibratory characteristics of the vocal fold and assess the severity of function related to vocal cord closure.
— Laryngeal electromyography assesses the electrical activities of the intrinsic muscles of the larynx and allows the clinician to differentiate what muscles and nerves are involved.

If the cause of the VCP is not readily determined during the exam, the person will be asked to undergo additional testing. It is important to determine the root cause of the VCP because one of the cause is a mass or tumor on the nerve pathway. A CT scan with contrast of the neck and chest from skull base to the aortic arch is sufficient to evaluate for most of the malignancies that could impair nerve function. If the clinical findings on physical examination suggest higher vagal nerve involvement, an MRI (magnetic resonance imaging) of the brain and skull base may also be considered. If there is swallow dysfunction and aspiration, a barium swallow may also be recommended.

Treatments are dictated by the root cause of the VCP. That’s why early identification of the cause is critical.

1) If loss of vocal motion is a symptom of a disease, the disease treatment may alleviate the VCP.

2) In people who have had surgery, identification of nerve injury or mechanical injury to the larynx may be reversed by appropriate early surgical intervention. Damaged nerves to the larynx have the potential for complete or partial recovery.

3) In people who have a tumor or mass, treatment of the underlying cause may have an impact on vocal issues.

4) In people with a virus, treatment of the virus can impact the resulting vocal issue. When there is only inflammation of the nerve or where the nerve was only stretched, the nerve can be expected to recover without major disability.

Other Possible Interventions for VCP

Voice therapy and referral for speech-language pathologist can be an important alternative to surgical intervention in patients with symptomatic vocal cord paralysis. They can help in education of the patient’s regarding better laryngeal function. They can use therapeutic intervention approaches to improve the voice as well as swallow dysfunction. In people with mild breathy voice quality therapy can include compensatory strategies to vocal exercises to improve glottic function. The speech-language pathologist is also a integral part of the voice rehabilitation team after surgical intervention for vocal cord paralysis

The body is miraculous and is always attempting to heal itself. As a result, a do nothing approach may be advocated. Wait and see is a conservative way to treat vocal cord paralysis or paresis and is for people with minimal symptoms or for those who do not wish to pursue intervention.

Operative injection laryngoplasty is appropriate when the vocal cord cannot be easily accessed using an office-based approach or if the material that is to be injected is very viscous or large volumes are anticipated.

Medialization laryngoplasty pushes the vocal fold into a better position by inserting an implant lateral to the vocal cord. 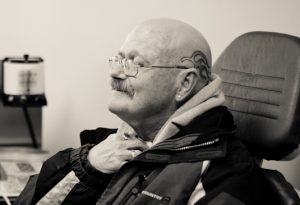 There are a variety of causes for vocal cord paralysis. It is critical to work with your doctors to find the root cause of the condition in order to get the proper treatment. 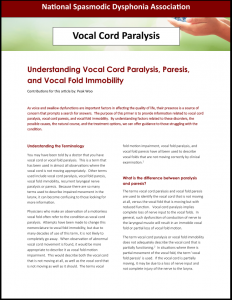 Visor card for your car-Order a FREE one today 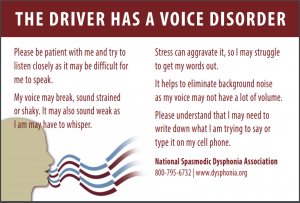