Tremors are rhythmic, involuntary oscillating movements that, when the muscles of phonation are involved, have a disabling effect on the voice. Vocal tremors may not only impact the intrinsic muscles of the larynx, but also the extrinsic muscles, as well as the muscles of the diaphragm, chest wall, abdomen, mouth and throat. Because muscles in all of these parts of the body are used to speak, a tremor affecting any of these areas can make the voice sound shaky. With a tremor, the vocal cords flutter open and closed during voicing, and also sometimes during quiet breathing. The cycle typically occurs four to twelve times per second.

Who is Affected by Tremor?

Tremor is an neurological disorder. There is no known underlying condition that triggers the onset of tremors. The tremors can begin at any age, but they most commonly affect older people.

Vocal tremor causes rhythmic changes in loudness and/or pitch, which vary in severity. In cases of mild tremor, there may only be minor quavering in the voice. More severe tremor can actually cause interruptions in sound production. Variations in loudness (and sometimes in pitch) caused by essential voice tremor are rhythmic and always present, no matter the type of vocalization. Those with voice tremor may adopt whispering as a standard mode of speaking, as it masks these variations.

There is no specific test with which to diagnose essential voice tremor. Diagnosis is based on the observation of the typical vocal cord movements during voicing. The presence of essential tremor in the head or the hands often indicates the existence of a vocal tremor, although it is not required to make the diagnosis. In addition to listening to the voice, fiber-optic technology and a stroboscope may be used to identify a vocal tremor.

Videostroboscopy provides a magnified, slow-motion view of your vocal cords, which allows laryngologists to see how the larynx is functioning during the production of sound.

People with tremors in other areas of the body may respond to medication, however, studies that show that it has little impact for the use of a vocal tremor.

Those with severe tremors may see temporary improvement in symptoms when treated with botulinum toxin injections. A doctor will inject it into the vocal folds through the neck. This often evens out the voice making it easier to speak. The injection would need to be repeated every 3-4 months. And while this is the primary treatment for SD, some people with vocal tremor may see a dramatic improvement in their tremor as well. 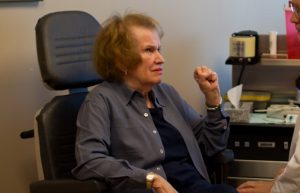 Tremor can present either alone or in conjunction with other voice conditions. Tremor can also affect other parts of the body. If a person has a vocal tremor and spasmodic dysphonia, treatment with BTX may improve the symptoms of SD and reduce the breaks, but the vocal tremor may be more prominent when a person speaks.