Voice impairment has many different causes

Approximately 7.5 million people in the United States have trouble using their voices according to the National Institutes of Deafness and Communication Disorders but the symptoms and the causes are varied. No matter the cause, a voice condition can have a traumatic effect on an individual.

Persons with a change of voice quality often say they are “hoarse.” In the world of medicine, the word “dysphonia” is used to mean essentially the same thing. Literally, this term means “abnormal sound of the voice. Dysphonia (hoarseness) is very common. It affects nearly one-third of the population at some point in their lives.

According to the American Academy of Otolaryngology, the term dysphonia is used to characterize an abnormal voice quality, pitch (how high or low the voice is), volume (loudness), or vocal effort that makes it difficult to communicate as judged by a health care provider. The symptom of hoarseness is related to problems in the sound-producing parts (vocal cords or folds) of the voice box or larynx. Your voice may have a raspy, weak, or airy quality that makes it hard for you to make smooth vocal sounds.

Dysphonia International is dedicated to being a resource for persons with spasmodic dysphonia and related voice conditions like muscle tension dysphonia, vocal tremor and vocal cord paralysis. These specific causes of dysphonia are our current focus. We offer well-developed support and tools for spasmodic dysphonia and have begun to build a collection for the related disorders. This section will continue to be expanded as new materials become available.

If you are a person asking “what’s wrong with my voice,” we have included below a list of different voice conditions.

Dr. Robert Bastian has generously allowed us to reprint this information on voice disorders. Full descriptions of these voices disorders can be found at his teaching website, Laryngopedia (www.laryngopedia.com).

Disorders of the nervous system (neurological) can affect the voice in different ways.

Common disorders that affect the voice are vibration-induced lesions, or injuries, of the surface layer of the vocal cords, called mucosa. This kind of injury usually happens when a person overuses or abuses his or her voice.

These are benign lesions or conditions that occur in the larynx but, unlike vocal cord vibratory injuries, usually without correlation to excessive voice use.

Laryngitis is a general term for inflammation of the larynx. There are different variants and causes.

Malignant tumors
A tumor is considered malignant if it has the potential to invade or spread to other tissues.

Benign tumors
A tumor is considered benign if it doesn’t pose the threat of invading or spreading to other tissues.
— Amyloidosis
— Chondroma
— Recurrent respiratory papillomatosis caused by human papillomavirus (HPV)

These are other disorders, terms, or descriptors used in the realm of voice and larynx disorders.

Special thanks to Dr. Robert Bastian for generously allowing Dysphonia International to reprint this information on voice disorders. Full descriptions of these voices disorders can be found at Laryngopedia (www.laryngopedia.com). 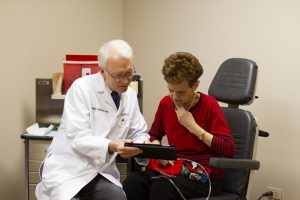 There are many different types of voice disorders and causes, but one thing is the same – the impact on your life. Talking with your healthcare professional can help you understand what is wrong with your voice and is the first step toward treatment and healing. Dysphonia International Medical Chairperson, Dr. Robert Bastian, talks with his patient about her diagnosis. 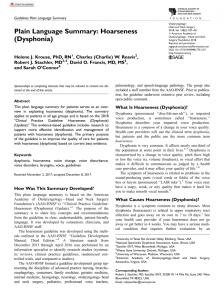